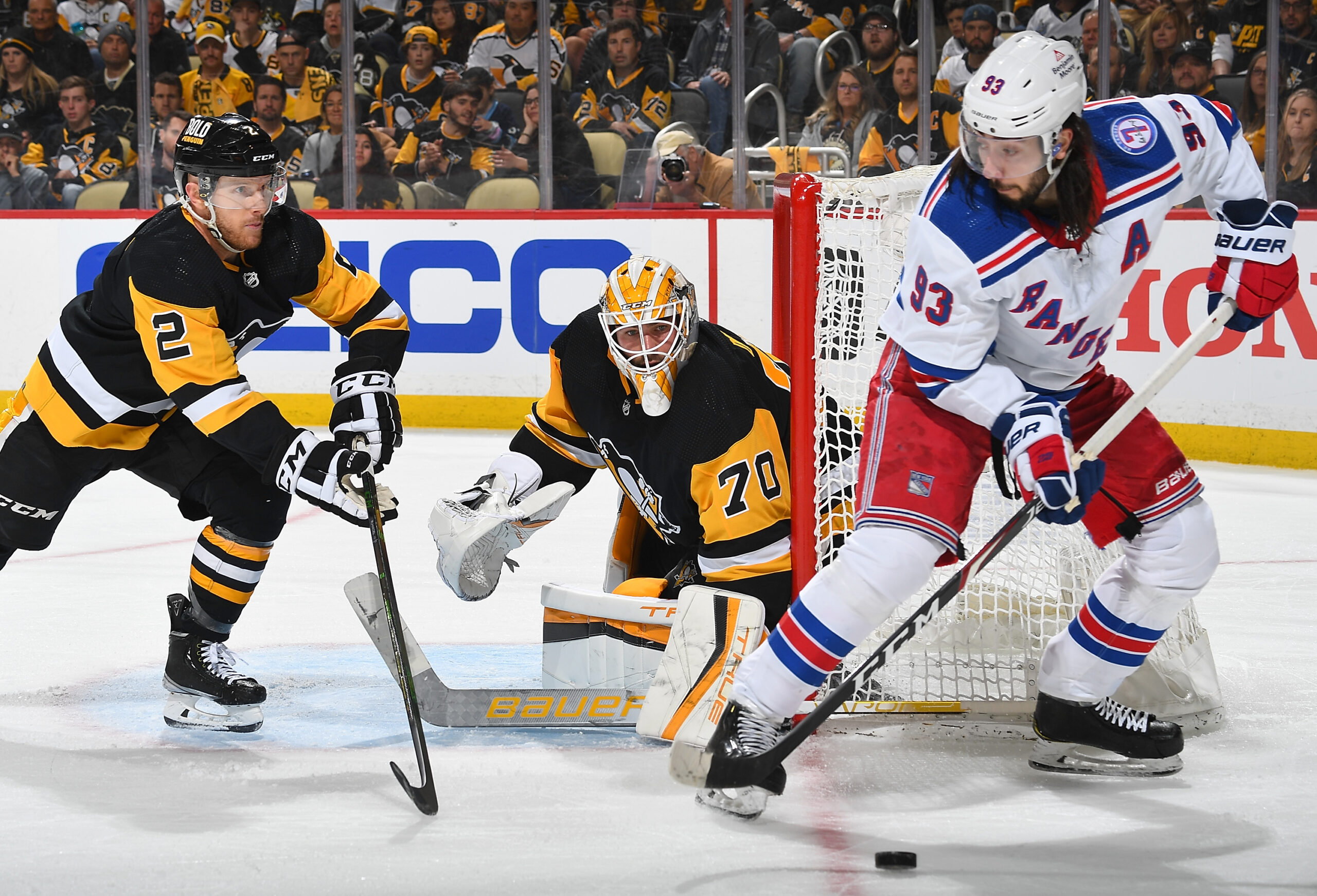 When the Pittsburgh Penguins were drawn to meet the New York Rangers in the first round of the 2022 Stanley Cup playoffs, it was billed as one of the marquee matchups in the Eastern Conference. It lived up to the hype, as the Rangers stormed back from a 3-1 series deficit to eliminate the Penguins in seven games. While the tension was palpable through those seven games, it looks quite different for the Penguins in retrospect. For the boys from the ‘Burgh, the 2022 Playoff loss boils down to the things that they almost did.

The Penguins performed extremely well in their three victories, but the Rangers were able to capitalize on major momentum swings to eliminate them in seven games.

Although it was certain that Penguins’ starting goaltender Tristan Jarry would not be playing to begin the series in New York, very few could have predicted what would transpire during overtime of Game 1. 5:58 into the second overtime period, backup netminder Casey DeSmith – starting in place of Jarry – was forced to leave the game with a lower-body injury, one which would ultimately end his season. Thrust into the spotlight was third-string goalie Louis Domingue, who backstopped the Penguins to all three of their first-round victories.

As incredible as Domingue’s 2022 story was, it was overshadowed by the play of Rangers goaltender Igor Shesterkin. In that same Game 1, a 4-3 Pittsburgh victory, Shesterkin registered 79 saves, the second-most in any playoff game since shots-on-goal were first tracked in 1955-56. Across the seven games, he posted a 3.66 goals-against average (GAA), a .910 save percentage (SV%), and most importantly, he held the Penguins’ “big three” off the scoresheet for the majority of the series.

Related: 3 Pittsburgh Penguins Not Expected Back in 2022-23

Shesterkin’s playoff performance was largely a continuation of his incredible regular season, during which he carried the fire for the Rangers and earned his way to being one of the finalists for the Hart Trophy as the NHL’s MVP. His accolades keep coming, as he was also recently named a finalist for the Vezina Trophy as the league’s top goaltender. Just as he had the Penguins’ number in the playoffs, he had everyone else’s in the regular season. (From ”Staple: Rangers Need Igor Shesterkin to be ’MVP Igor’ in Game 7 vs. Penguins”, The Athletic, 15/05/2022)

Penguins Almost Held On to Win

Even though the series was tied going back to Pittsburgh for Game 3, the Rangers had a fresh dose of confidence coming out of their Game 2 victory. It was doused quickly as the Penguins stormed out to a 4-1 lead – scoring three unanswered goals – and the Rangers seemed lost. However, the unfortunate trend began in the second period of Game 3. The Rangers scored three goals in less than 10 minutes – including one shorthanded – to tie the score. Although the Penguins ultimately held on, the comeback would serve as an omen of what was to come.

In Games 5, 6, and 7, the Penguins held multiple-goal leads and let them slip away. Game 5, they were up by two goals in the second period, looking to put the Blueshirts away for good. Sadly, the events of Game 3 repeated themselves as the Rangers scored three straight to take the lead and a further two after Jake Guentzel tied the game. Game 6 played out the exact same way. Two early Penguins’ goals, followed by sustained Rangers’ pressure and the lead evaporates.

Game 7 was perhaps the worst example of all. Although only up one goal this time, the Pens held that lead until late in the third, when Mika Zibanejad scored with just over five minutes remaining. The Penguins were unable to recover, taking a penalty in overtime. Artemi Panarin scored on the ensuing power play to win the game and end the Penguins’ season.

Although it seemed the Penguins were destined to eliminate their Metropolitan Division rivals in five games, the atmosphere of Game 5, the two games that followed, and the series as a whole can be described in terms of what the Penguins attempted and came ever so close to accomplishing.

Covering the Pittsburgh Penguins and other topics for The Hockey Writers. Also a big fan of the Chicago Cubs and progressive rock music.