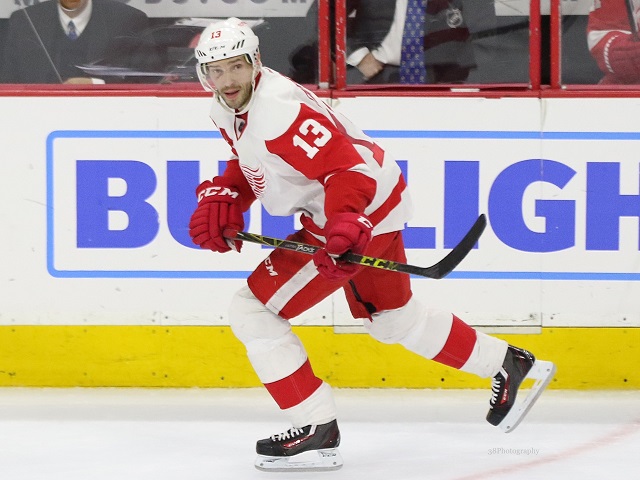 Pull up Siri or whatever AI assistant you have on your phone and then ask it “who is the Magic Man?” Seriously, do it, I’ll wait.

Pavel “The Magic Man” Datsyuk’s reputation transcends the game of hockey. For sports fans across the state of Michigan, he’s a symbol of greatness, representing an era where the Detroit Red Wings dominated the NHL, and the Tigers and Pistons both were championship threats in their respective leagues. That Siri knows him by his nickname should tell you all you need to know about how special No. 13 was.

Instead, hockey fans across the world will remember him for the living highlight reel he was. They’ll remember his ability to turn a defensive shift into an offensive one in the blink of an eye. In some cases, he’ll even be remembered as the most creative player to ever wear a pair of skates.

The Red Wings have a bit of a reputation for turning late-round picks into absolute superstars. Perhaps the greatest example of this is Datsyuk, who was selected with the 171st pick of the 1998 Entry Draft. Only two players from that draft scored more points than him: Brad Richards (923 points, 64th overall) and the top pick of that draft, Vincent Lecavalier (949 points.)

Datsyuk wasn’t a big-time scorer during his draft year. In fact, he was passed over entirely during his first TWO draft-eligible seasons. He was on the verge of turning 20 years old when the Red Wings scooped him up. Can you imagine how differently hockey history would look if he had passed through the draft yet again?

Related: 7 Detroit Red Wings Numbers That Should Be Retired

Datsyuk caught the eye of legendary Red Wings scout Hakan Andersson with his play-making abilities. Andersson likened them to another Red Wing great – Igor Larionov. The young Russian didn’t have the prettiest skating stride, and his lack of size was noticeable, yet the team and its scouts remained intrigued by the forward’s skill-set, knowing very well that he’d be a “project player” if they selected him.

Two Kids and a Goat

The legendary 2001-02 Red Wings team is known for boasting the talents of Steve Yzerman, Sergei Fedorov, Niklas Lidstrom, Brendan Shanahan, Luc Robitaille, the aforementioned Larionov, Brett Hull, Chris Chelios and Dominic Hasek. Each and every one of those players is a legend in his own right, and yet a certain rookie made a name for himself on that team.

The line consisting of Datsyuk, Hull and Boyd Devereaux became known as the “two kids and a goat” line, reflecting Hull’s senior status among his linemates. With Datsyuk’s ability to create plays and Hull’s ability to finish them, the line provided the team with depth scoring that few could match.

Coach Scotty Bowman quickly grew to appreciate the rookie center. Given the Hall of Fame talent scattered throughout the Red Wings’ lineup that season, it was hard for a young forward to truly climb up the depth chart. Still, Datsyuk’s play that season not only put him on the map, but it also helped the Red Wings win the Stanley Cup that season.

The next season, another rookie forward joined the Red Wings and found immediate success: Henrik Zetterberg. Playing alongside Datsyuk and Hull, the trio created the second iteration of the “two kids and a goat line” and their success as a unit helped Zetterberg finish as the runner-up for the Calder Trophy as rookie of the year.

From that season and on, Datsyuk and Zetterberg established an on-ice chemistry that was second to none. They seemed to know where each other were at all times, displaying a sort of twin telepathy that earned them the nickname “The Euro-Twins.” Their dominance together was so well-known and well-respected that when Datsyuk retired from the NHL in 2016, many wondered if Zetterberg would be able to produce without his “twin” alongside him.

Whenever you watch highlights of Datsyuk or Zetterberg, the other is almost always on the ice with them. Not only were they a dominant offensive pair, but they were both just as adept in the defensive end as well. During the 2007-08 season, both of them were finalists for the Selke Trophy, with Datsyuk skating away with the honor. They were two-way forces that always seemed to tilt the ice in the Red Wings’ favor.

For the fans, the name “Datsyuk” conjured up images of flashy dekes and unbelievable maneuvers. Simply put: he did things with the puck that few others would dream of.

Famed Red Wings play-by-play announcer Ken Daniels eventually coined the term “Datsyukian deke” to descrive what would otherwise be indescribable. He could create space for himself using his hands, and once he had space, the threat of a scoring chance was always there. Throughout the years of calling Datsyuk’s career, Daniels would often gasp in amazement as the silky smooth centerman always had something new up his sleeve.

Following the announcement that Datsyuk would retire from the NHL in the summer of 2016, the Red Wings moved his contract to the Arizona Coyotes at the 2016 Draft. While it was a savvy business move at the time, seeing his name associated with the Coyotes the following season left an awful aftertaste in the mouths of many across the league.

This is because Datsyuk was one of those players that became associated with the team he played for. Over the span of 14 seasons, speaking the words “Red Wings” would conjure up images of a happy-go-lucky forward who just so happened to have the best hands of his generation. For a team that made “The Russian Five” famous, Datsyuk represents the last great Russian player to play for the Red Wings.

There may never be another player like Datsyuk. He didn’t have blazing speed or imposing physical traits. Instead, he was insanely smart, and his creativity on the ice was nothing short of inspiring. Kids who grew up watching him play are undoubtedly trying to recapture the magic he brought to the game.

That’s why even Siri knows who The Magic Man is.

I am a Western Michigan University alum whose passion for hockey knows no limits. Dr. Pepper enthusiast. Catch me and my fellow Red Wings writers’ YouTube show “The Hockey Writers Grind Line” which drops every Saturday.