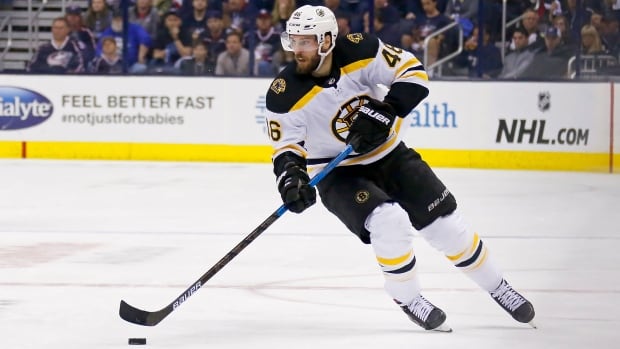 David Krejci is leaving the Boston Bruins after 14 NHL seasons to continue his hockey career in his native Czech Republic.

The 35-year-old Krejci, whose contract had expired, announced his decision with a social media post sent out by the Bruins on Friday.

“At this point in my career and life, I need to return to the Czech Republic and play in front of my family who sacrificed so much to help me achieve my NHL dreams,” Krecji said. “I want my children to live where I grew up, spend time with so many Czech family members who love them and create lifelong memories.”

Krejci was a steady, reliable second-line centre whose career in Boston included winning the Stanley Cup in 2011. After making his debut in 2007, he piled up 215 goals and 515 assists in 962 regular-season games and 124 points in 156 career playoff games, helping the Bruins reach the final three times.

Playing in Europe would open up Krejci to represent the Czech Republic at the 2022 Winter Olympics in Beijing if the NHL does not participate.

“A little bit surprised for sure,” Grubauer said Friday. “I think we tried till the last minute to work something out [with Colorado]. Didn’t work out and then entered free agency. Never experienced that craziness. Everybody was calling once the window opens up so it was a little wild hour and definitely a crazy experience.”

Signing Grubauer was the biggest splash made by the NHL’s newest franchise, which gave him a six-year, $35.4 US million deal Wednesday. Landing him seemed unlikely given the success he had last season in Colorado, but the Kraken jumped at the opportunity to add one of the top goaltenders in the league.

And for his part, so did Grubauer.

“I think it’s incredible to be part of something new and make history in terms of like playing the first-ever game and being part of that group and doing the same thing Vegas did,” Grubauer said. “That’s the goal, too.”

Grubauer was a finalist for the Vezina Trophy for the first time last season, when the 29-year-old goalie went 30-9-1 with the Avalanche with a 1.95 goals-against average and a .922 save percentage. He also led the league in shutouts with seven and didn’t lose consecutive games all season.

“I think you look at his save percentage, his goals against lately. Look at how he played last year in the playoffs, the fact that he was a finalist for the Vezina. I mean, he’s had a pretty good run,” Seattle GM Ron Francis said earlier this week. “I remember watching him play back in the day with Washington when they won the Cup. He’s a guy that’s proven over time that he can play at this level, an elite level.”

Grubauer and Chris Driedger make up Seattle’s primary goaltending duo. Grubauer appeared in 40 of Colorado’s 56 games last season and also saw the importance of having two elite goaltenders during his time in Washington, when he was paired with Braden Holtby.

“The way we won in Washington, I played 40 games, 45 games, [Holtby] played half the season and then the playoffs he was fresh,” Grubauer said. “It’s always good to have a good tandem. I don’t think one guy can play 70 games and then be fresh for the playoffs. You always need two.”

Between Grubauer and Driedger, the Kraken have committed 11.5 per cent ($9.4 million) of this year’s salary cap to the goalie position. But Seattle still has $16 million of cap space available, and while the Kraken are likely to keep a significant chunk of that free for future moves, it also provides them with the opportunity to add another piece or two before training camps open in September.

“It’s going to be really interesting what system coach [Dave Hakstol] puts in place and we got to find our identity as a team,” Grubauer said. “The team looks great on paper but obviously you got to play and create some chemistry.”