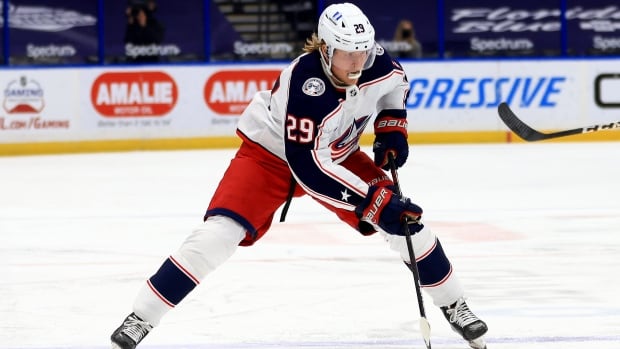 Also on Wednesday, Boone Jenner signed a four-year, $15 million contract extension that will keep the forward with the Blue Jackets through the 2025-26 season and forward Eric Robinson signed a two-year, $3.2 million extension through the 2023-24 campaign.

Laine, 23, had 24 points (12 goals, 12 assists) in 46 games split between the Blue Jackets and Jets last season. He was acquired by Columbus in a trade with Winnipeg on Jan. 23.

“Last season was a tough one, but I’ve put it in the past and am looking forward to getting back to Columbus and helping this team move forward,” Laine said. “I’ve had a good summer training and I’m excited about what’s ahead for me personally and for our team.”

“We are very pleased to have come to terms with Boone, who has been an integral part of our team for the past eight seasons, on this extension,” Blue Jackets general manager Jarmo Kekalainen said. “From the day he was drafted in 2011, Boone has been a consummate professional with his work ethic, character and leadership. He is an important part of our hockey club and ensuring he remains a Blue Jacket for years to come was a priority for us this summer.”

“Eric has provided size, speed and competitiveness to our lineup since making his NHL debut in 2018,” Kekalainen said. “He is a young player that has steadily improved each year. We believe he has just begun to realize his potential and as he continues to improve will have a significant impact on our hockey club moving forward.”

Maple Leafs & Blackhawks Have Pieces to Produce Offseason Blockbuster
Islanders Must Reinvent Themselves Under Lambert
Chicago nearing deal with Montreal assistant Luke Richardson to become head coach: reports
Avs a win away from the Cup: What we learned in the Game 4 OT thriller
AHL grads help Avalanche to Stanley Cup crown