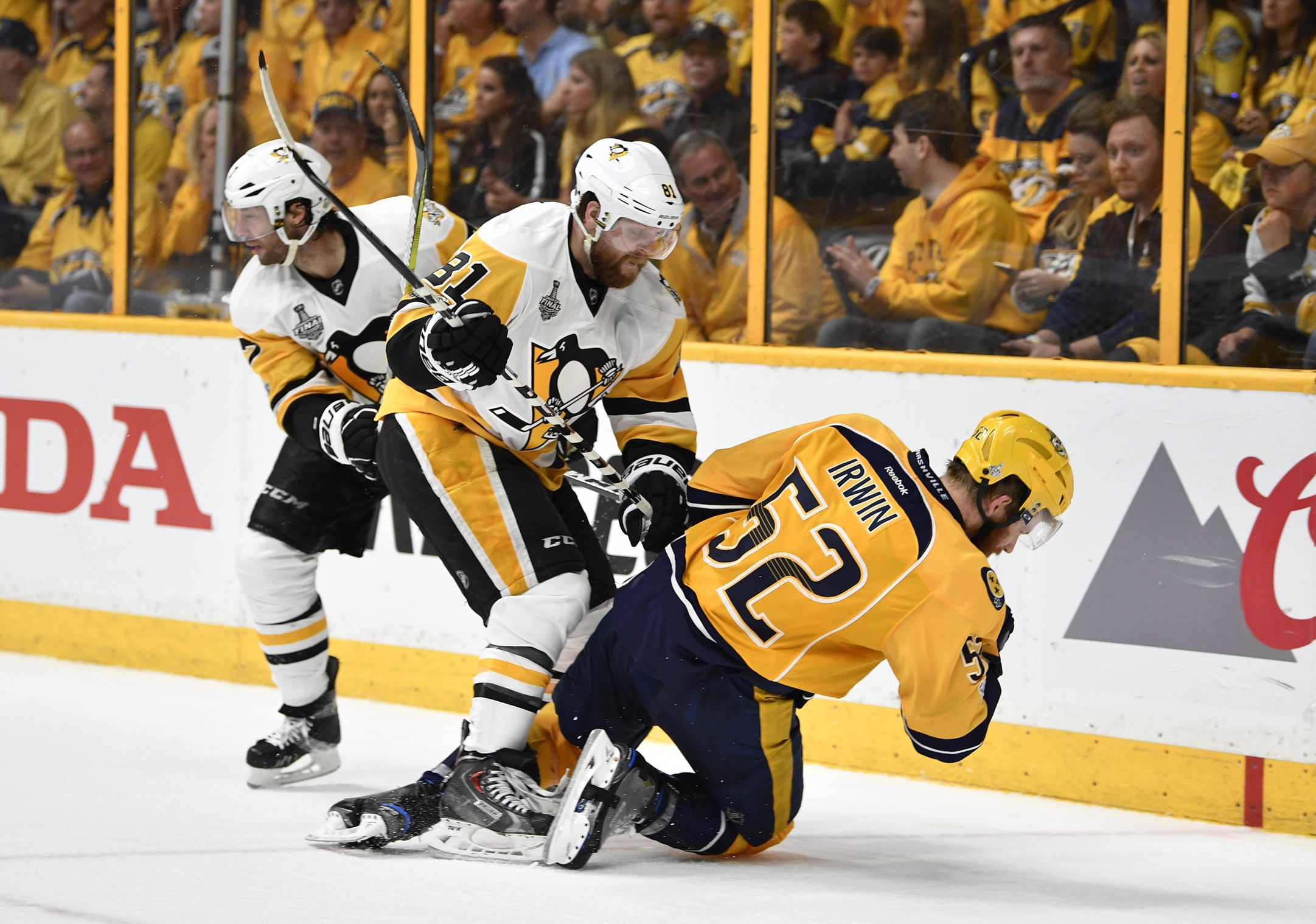 Some fans might find it difficult to tune into Game 6 of the Stanley Cup Final on Sunday night after the Pittsburgh Penguins destroyed the Nashville Predators, 6-0, in Game 5. It was no contest from start to finish, as Sidney Crosby, Evgeni Malkin and company dominated play, looking very much like the defending champions.

But Cinderella’s glass slipper isn’t broken yet. The Predators have plenty on their side heading into Game 6.

Nobody has been better at home this postseason than Nashville. At Bridgestone Arena, the Predators are 9-1 and have averaged 3.4 goals per game. On the road, Nashville is 5-6 and scoring 2.36 goals per contest.

There’s been so much talk about the Music City crowd, and for good reason. They will need to be heavily involved from the start if the Predators are going to put behind them Thursday’s dreadful performance and force a Game 7. It can be done.

Penguins and Predators are a combined 18-4 at home in these playoffs. The other 14 clubs were a combined 28-35 on home ice.

Nashville goaltender Pekka Rinne will have to be better too. He’s allowed 11 goals on 45 shots in Pittsburgh, but at home, he’s been fantastic, allowing only two scores on 52 shots. In the postseason overall, Rinne has a .949 save percentage and 1.44 GAA at home. He’ll need one more signature performance Sunday night.

The fact this game is in Nashville produces a high probability that Rinne and the Predators will be able to bounce back. Recent history is on their side too.

In these Stanley Cup playoffs, teams that have won a game by six or more goals are 0-3 in the following contest. That includes the Penguins, who defeated the Ottawa Senators during the Eastern Conference Final in a very similar fashion, 7-0, at home in Game 5 and went on to lose a close Game 6, 2-1, in Ottawa.

The #Penguins must learn from their previous three series if they want to close out the #Predators in Game 6. #StanleyCup https://t.co/nHebEclxVd

Everything went perfectly for Pittsburgh in the last game. They have no adjustments to make; they’re just going to try and play the same way, which could be to the advantage of Nashville. If the Predators make the proper adjustments to slow down Pittsburgh’s ferocious forecheck, they should be successful on Sunday.

Looking at even more recent history, there’s more to like about Nashville’s chances in Game 6. The Penguins haven’t closed out an opponent on their first try this spring, and the last time they did (excluding Game 7s) was against the New York Rangers all the way back in the first round of 2016. That was seven series’ ago.

Pittsburgh has needed more than one opportunity to close out an opponent in five of its last six series. Under coach Mike Sullivan, Pittsburgh is 4-6 in closeout games (again, excluding Game 7s).

There isn’t much to complain about with Sullivan and his team, but being able to avoid additional games is something the Penguins haven’t been able to do. Pittsburgh’s inability to close out, combined with Nashville’s home-ice advantage, points towards this series going seven.

So You’re Saying There’s a Chance?

There’s absolutely a chance. Based on the way they’ve played in the first three games in Pittsburgh, it will be a tall order for Nashville to beat this Penguins team on home ice, but the Predators have to love their chances in Game 6. And, at that point, anything goes in a Game 7. Who wouldn’t want that opportunity even away from the friendly confines of home?

Though Penguins fans won’t want to hear this, this series is starting to mirror the 2009 Stanley Cup, where Crosby won his first championship. The home teams won each of the first four games, and the Penguins had momentum heading back to Detroit for Game 5, only to then lose 5-0.

Everyone thought the series was over. Pittsburgh was done. Not to be, as the home team won again in Game 6, and then the Penguins dethroned the mighty Red Wings, 2-1, in Game 7.

Over the last decade, Pittsburgh has turned into the franchise to emulate, as Detroit was at that time. But the upstart Predators, just like the ’09 Penguins, will not go quietly. They could even shock the world and win.

Dave Holcomb is excited to join The Hockey Writers team, covering the Pittsburgh Penguins. Holcomb began his NHL work as a fantasy columnist at The Sports Network. In 2015, Holcomb joined the fantasy NHL team at FanRag Sports, where he eventually worked into a beat writer position, covering both the New York Islanders and Pittsburgh Penguins. He continues to cover the Metropolitan division, along with the NFL and Syracuse basketball, for FanRag Sports. To find more of his work, follow Holcomb on Twitter at @dmholcomb.

Unlikely Hero Leads Lightning to Series Win vs. Maple Leafs
Oilers blank Kings to prevail in decisive Game 7, advance to 2nd round
Why the Avalanche are the NHL’s postseason juggernaut
Blues and Avalanche tied 1-1 heading into game 3
Perron scores twice, Blues even series with Avs